Home / Blog / The Corvette That Started It All, and How I Got Her Back

The Corvette That Started It All, and How I Got Her Back

This is the saga of the car that started it all, how it was really the beginning of Corvette Recycling, and how I was able to get her back after 15 years. This is a car that I thought I would likely never see again. She wasn't technically mine to begin with as the title might imply, but I had a very strong connection with this car. My father in law is Doug, the founder and owner of Corvette Recycling, and this car is actually the genesis of that business even though we didn’t know it at the time. As many of you probably know he has been a hard core Corvette guy for his entire life. Shortly after I married his daughter in 2004, he purchased this 2001 Z06 from a salvage auction with the idea to turn it into a convertible.

We then purchased a convertible C5 for parts, and sold the rest of the car on eBay. Even with the convertible donor we still needed several more parts for the car. We had a budget for the build, so we needed to get everything we could from the used parts market. Ordering used Corvette parts was nothing but disappointment after disappointment as the parts came in broken, or dirty, or both. We thought to ourselves, we can do this better. Not long after completing the build we started to purchase low-mileage cars out of the salvage auctions, and Corvette Recycling was born.

Doug and I hit it off pretty well from the beginning having found common ground in our love for cars, but this is how we really bonded. We put countless hours into this Z06 over the course of 8 - 10 months. I then worked with him at Corvette Recycling for 7 or so years after. Though I am no longer involved in the day to day operations of the business, I try to help out where I can.

Getting back to the car. We cut the top off of the Z06, welded in the brackets for the convertible top and swapped everything over from the other car. At the time we were surprised at how straight forward it was. After the convertible conversion, we decided to paint the car ourselves. We built a large plastic paint booth inside a building he had at the time. The booth alone took almost three weeks to build and perfect. This is where I really formed a bond with the car. Doug is a meticulous guy and wanted the paint job to be perfect...and I mean perfect. I sanded that car by hand at least 3 times. I even put my initials on the car under the left rear quarter panel written in panel bonding adhesive. The paint job turned out beautiful, however we didn't realize at the time that we were using too fine grit sandpaper between clear coats...and now some of it is unfortunately flaking off. 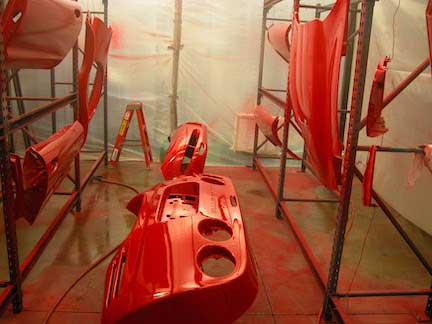 Doug had purchased a high rise hood for the car, and it occurred to me that there was plenty of room for a supercharger. He wasn't really a performance mod type of guy (a bit of a purest when it comes to Corvettes), but I eventually talked him into it, and we installed a polished Magnuson supercharger, a set of shorty headers, and a Borla cat back exhaust. My dad, and brother actually helped us install the supercharger...so the car has ties to almost my whole family. The car was making about 550 hp at the wheels, and I was absolutely in love with this thing. 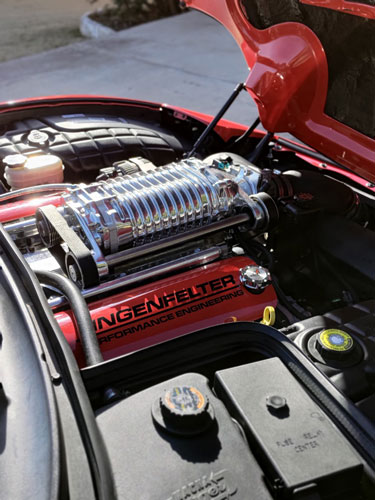 Much to my dismay, only two weeks after the car was finished, Doug had a friend who was going through a divorce begging him to sell him the car. Doug being who he is, and knowing that we could build another one (we didn't), agreed. I was absolutely crushed.

The guy who bought the car kept it for 10 years or so, and then gifted it to a close friend of his who was at the time, going through a divorce of his own. He used the car to date his now wife, and the car meant a lot to them and their family. About 2 months ago he sent Doug a photo of himself with the car, and I wondered if he would ever sell that to me...thinking sometime well into the future. I asked Doug to bring it up the next time he spoke with him, and just to ask that if he were to ever sell the car, could I be first in line? His response was that he would never sell the car, it meant too much to him, and he just couldn't see parting ways with it. Doug explained how much the car means to me, but left it at that. I figured that was that, and the car was forever out of reach.

However, a week or two later, we received a phone call saying that he woke up at 2 AM and just realized that the car belonged here. I was absolutely shocked, I didn't think I would ever see the car again, much less be able to own it. We worked out a price, and I booked flights for my wife and I to fly to Texas and bring her home.

Upon arrival, we went to the house, sat cordially at the dining room table for what felt like an eternity catching up. My wife had been close to him in her childhood, so I was trying to be polite while they reminisced. I finally asked if we can please go look at the car. When we got to the garage, she was there, under a satin red cover. As we rolled back the cover, tears filled my eyes. It was absolutely surreal to be standing in front of this car after all this time. 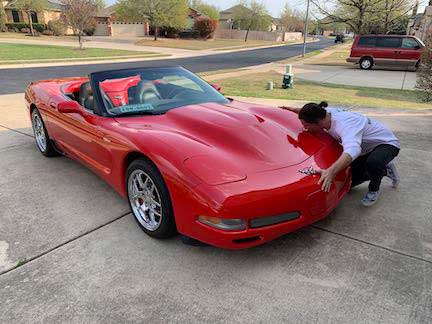 Unfortunately, on the first drive of the car, we noticed a cloud of grey smoke following us down the road. The car had just been to a speed shop that we will leave unnamed for a set of long tubes and a tune. Turns out compression is down (35psi) on cylinder 7, and I am almost certain that the shop broke it while making pulls on the dyno and didn't own up to it. Additionally, I found two bolts loose on the oil pan which was leaking. Let's just say I don't think this was a quality job.

We decided to take our chances and drive the car home from Austin, TX to Utah....i was just happy to have her, and not afraid of digging in to fix whatever the problem was. I do have access to a Corvette shop, and all the parts I could ever need after all. My thinking at the time is that it probably wasn't all that serious. However, by the time we got to Santa Fe, the rear bumper was completely coated in oil. We were kind of committed at this point, and the car seemed to be running ok, so I kept topping off the oil and we eventually made it home.

She has been home for two days now, and we pulled the drive line yesterday. Everyone who worked on the car originally was there. Doug, my Dad, and my little brother. As frustrating as the issue was, we had a great time and I think it was a pretty special opportunity for all of us to get together to work on a car that we have so much history with. 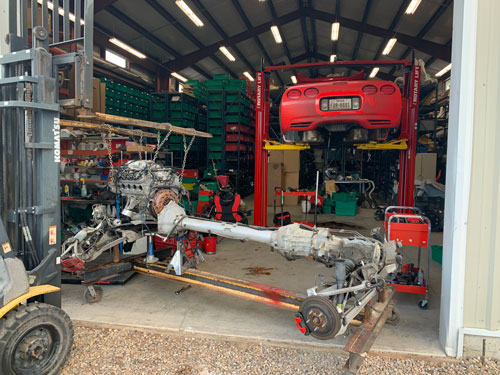